When you want to have a multiple monitor setup, you certainly need multiple video outputs from your Desktop/Laptop.

Splitting/converting the solo HDMI port in the graphics card is troublesome.

And the onboard HDMI port of the motherboard is disabled by default when you have a graphics card installed.

(Anyways, the native motherboard ports would only output from the CPU’s integrated graphics)

So, Why do graphics card manufacturers don’t put multiple HDMI ports on them?

The Reason Why Graphics Cards Don’t Have Multiple HDMI Ports

There is no standard on the quantity or combination of Audio/Video output ports a graphics/video card should have. A modern GPU may have one or more each of Super VGA, DVI-I, DisplayPort, and HDMI ports.

A GPU’s output panel has limited space, and, in earlier days one display monitor was considered enough. So, all the manufacturers wanted was to provide at least one of each type of port(VGA, DVI, etc), so that the GPU remains backward compatible with the older display devices. This leaves little scope to have multiple HDMI slots.

Moreover, any video port, especially a DisplayPort can be converted into HDMI and vice versa using an adapter. The video card itself is capable to switch the DisplayPort output into HDMI mode.

DisplayPorts Is Backward Compatible With HDMI

One more reason why video cards especially the newer ones don’t have more than one HDMI port is that they generally have multiple DisplayPorts instead, which are arguably better than HDMI at least from a gamer’s point of view. The DisplayPort (DP) standard is backward compatible with HDMI.

In fact, for this reason, several GPU manufacturers provide multiple DisplayPorts, but only a single HDMI port. And, DP licensing is cheaper than HDMI. So manufacturers do not care about more than one HDMI unless there is disproportional demand. Basically, any DP port is also an HDMI, you just need a passive adapter.

And, if needed, for compatibility with a variety of display options like HDTV, Projector, or just multiple monitors; DisplayPorts can be easily converted to HDMI ports using a DP to HDMI adapter like this one.

STARWARE DisplayPort to HDMI Adapter (Supports up to 4K) 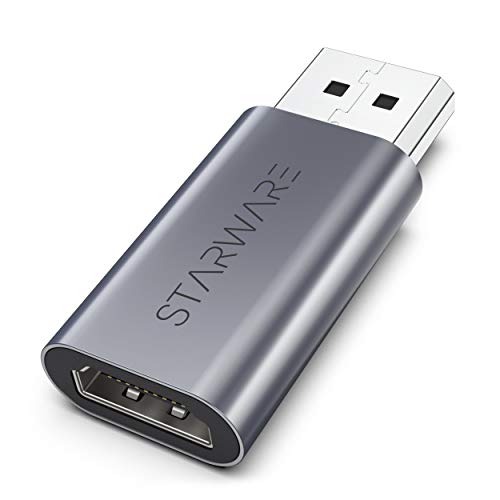 STARWARE DisplayPort to HDMI Adapter is a compact HDMI to DP cable adapter that attaches to any HDMI cable and makes it fit any DisplayPort output port. This Connects DisplayPort (DP or DP++ standard) output from any Desktop/Laptop to any HDMI input of monitor, projector, TV, or VR headset.

Some Newer Graphics Cards Do Have 2, 3, Or Even 4 HDMI Ports

Many newer graphics card models these days have two or more HDMI ports. We have a detailed buying guide for Graphics Cards with dual HDMI ports available.

Why Do You Need 2 HDMI Ports?

There may be a few scenarios where you might need multiple HDMI outputs from your video card.

To Set Up Multiple Monitors With Just 1 HDMI port

1. Using the other display ports like USB-C or DisplayPort (DP) available on the graphics card panel.

So, observe and find the ports common in both, your GPU and the display device to find the right pair.

However, the VGA and DVI port should be avoided as they have a lower standard.

Buy the appropriate data cable and connect. Some display settings need a little tweak to set the dual monitor up perfectly.

2. Using a splitter for one of the DisplayPorts/HDMI ports to output multiple HDMI/DisplayPort.

Another solution is to split the available output into two outputs, using an HDMI Splitter or DP Splitter according to the port type.

You should however only buy a high-quality splitter (like this one from amazon) as substandard splitters may reduce the video quality.

3. Using an adapter for DP to HDMI (or vice versa) to obtain desired output port type from the available port type.

We have already discussed that conversion of DisplayPort to HDMI is possible with the use of a DP to HDMI converter.

4. Enabling the inbuilt HDMI port of the motherboard

Though it is not recommended, you can always use the unused native, onboard HDMI port of the motherboard itself.

It is disabled by default when you have a graphics card installed. But it can be re-enabled. However, it is not guaranteed to work.

And it would only output from the CPU’s integrated graphics port, which is generally of lower quality than the dedicated graphics card.

To Increase The Video Resolution/Refresh Rate By Combining Two Ports

For high-end display devices, the maximum resolution of the HDMI standard can be a bottleneck. Especially when your graphics card has an older version of HDMI (like HDMI 1.2)

In that case, it is possible to get resolutions beyond the HDMI limit by combining multiple inputs.

This is however a hypothetical case as the odds that you have an 8K monitor, but only HDMI 1.2 standard in graphics card is very low.

Moreover, this setup would have several bottlenecks and is not likely to succeed for most systems.

In Case Of A Broken Port/Failover

All the workarounds discussed in this post should come handly in case of a display port is broken.

If the only HDMI port of the graphics card is broken, we can always use the DisplayPort to continue using the GPU before deciding to purchase a new one.

Do All Graphics Cards Have Single HDMI Port?

No. A graphics card may have Single or Multiple HDMI ports, or none at all. There is no standard for this. However, older graphics card models typically had just 1 HDMI port. But, some newer ones are selling with up to 4 HDMI ports among other ports. While many others still have a solo HDMI port.

Do I Really Need To Buy A Dual HDMI Graphics Card?

It can be avoided. There are workarounds for dual display even with a single HDMI port GPU like the use of a splitter or an adapter. But it always results in a reduction in the output resolution/framerate.

What Can I Do If My Graphics Card Doesn’t Have 2 HDMI Ports?

If your GPU has unused DisplayPort, you can convert it to HDMI using a DisplayPort to HDMI adapter. Or, you can split an HDMI output to multiple devices using a splitter. If none of those work, you can upgrade to a GPU with multiple HDMI slots.

We may earn an affiliate commission if you purchase something through our recommended links. Read disclosure.